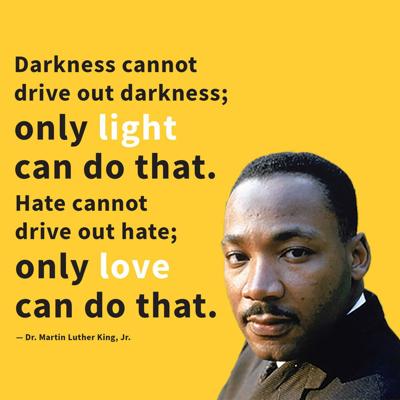 This week 2 for Seder honors Dr. Martin Luther King Jr. and all the folks who supported his efforts to make this country a fairer, better place.

Most minorities in America before 1964 were fiercely prejudiced against.  African-Americans, Asian-Americans, Italian-Americans, Irish-Americans and Jews were not allowed to work in certain jobs, stay at certain hotels or eat at certain restaurants. There were strict quotas at universities for each minority.

My Jewish family lived in different parts of New York State.  In my parents’ generation (late 1940’s and 50’s) they were called names at school, rocks were thrown at them, and there were parts of town that you “knew” not to go to – just because they were Jewish.  They spoke of the Holocaust and its survivors in whispers.  They took care of things quietly, so as not to attract too much attention – “hush-hush.”  This paled in comparison to what many African-Americans went through, but everyone who wasn’t a “WASP” was a second-class citizen.

Why don’t I and my children live like this?  What changed? The law was not on their side.  Dr. King and civil rights leaders changed what they were told could not be changed. and they would not be stopped.  As Dr. King, Rosa Parks, Bayard Rustin and many other African-American activists grew their fight for civil rights and to end Jim Crow laws, they formed a coalition of minorities to peacefully resist at a local, state and national level.  This coalition was especially visible at the Selma March in 1965.

Jewish Voices from the Selma-to-Montgomery March

What did the Civil Rights Act of 1964 Achieve?

The Act outlawed discrimination on the basis of race, color, religion, sex, or national origin, required equal access to public places and employment, and enforced desegregation of schools and the right to vote.

Because of this, life was different for people starting with my generation. Jim Crow laws were abolished, Irish-Americans can apply for any job, Asian-Americans can go to any University and Jewish-Americans could stay at any hotel. Hate crimes are Federal crimes and the law is applied (more or less) consistently across the country. In schools today, children from all backgrounds and religions play and learn together. Today we see interfaith and civil rights leaders coming together again because hatred is raising it’s head.  They are dusting off the playbook from Dr. King and working together to make sure that our immigrants and each minority all see their equal rights and we keep working to abolish hatred in all it’s forms.

The Civil Rights Act speaks to the strength of a multi-cultural society. It’s not perfect, but we are working together to keep improving. When you participate in 2 for Seder, you are walking in Dr. King’s footsteps.

Thank you Dr. King for your dream of us all living in harmony. Hatred has no home here and we are stronger together.

If you are having a large (more than 10 locations) Virtual Seder and are planning to use Zoom, please read the security update so you aren't "Zoom Bombed" at your Seder.

Are you ready with Plan B?

Looking for something to help you find the afikomen virtually?

Tzvia Rubens a third year rabbinical student at Hebrew Union College-Jewish Institute of Religion and her fellow student Caroline Sim submitted this graphic to us. When it's time to look for the afikomen, pop this "where's waldo" style image on the screen. Thank you Tzvia and Caroline!!

Please grab it here or off our Resource page at 2forseder.org/resources-for-virtual-seders/ ... See MoreSee Less

The Torah Speaks of Four Kinds of People Who Use Zoom:
The Wise
The Wicked
The Simple
The One Who Does Not Know How to “Mute”

The Wise Person says: “I’ll handle the Admin Feature Controls and Chat Rooms, and forward the Cloud Recording Transcript after the call.”

The Wicked Person says: “Since I have unlimited duration, I scheduled the meeting for six hours—as it says in the Haggadah, whoever prolongs the telling of the story, harei zeh ‘shubach, is praiseworthy.”

The Simple Person says: “Hello? Am I on? I can hear you but I can’t see you.”

[Jerusalem Talmud reads here: “I can see you, but I can’t hear you.”]

The One Who Does Not Know How to Mute says: “How should I know where you put the keys? I’m stuck on this stupid Zoom call with these idiots.”

To the Wise Person you should offer all of the Zoom Pro Optional Add-On Plans.

To the Wicked Person you should say: “Had you been in charge, we would still be in Egypt.”

To the Simple Person you should say: “Try the call-in number instead.”

To the One Who Does Not Know How to Mute you should say: “Why should this night be different from all other nights?”

(Source: unknown, but obviously someone very clever and on Zoom) ... See MoreSee Less