The B’nai Mitzvah that Pushed Back Anti-Semitism 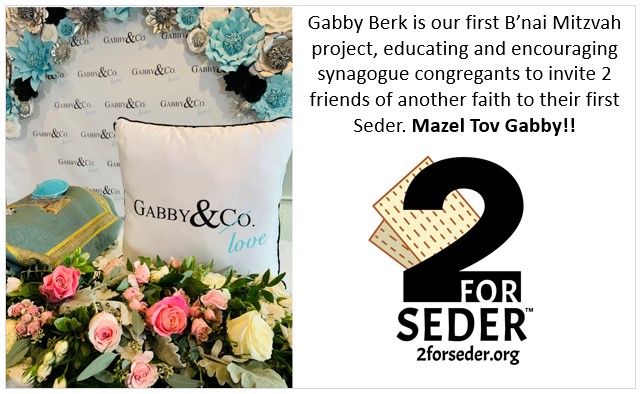 Can Kids Push Back on Anti-Semitism?

The children in our lives shouldn’t know the pain of anti-Semitism and hate. That’s the attitude my parents’ generation had – I grew up with little or no understanding of anti-Semitism outside of learning about the Holocaust. It couldn’t happen to me. Unsurprisingly, I was not prepared for anti-Semitism as a university student and of course completely blindsided by the murder of my Mother-in-Law in the Pittsburgh Tree of Life Synagogue Shooting.

Take Action believes that every individual has a role to play in pushing back against anti-Semitism and is capable of building bridges to our neighbors. This includes kids. More and more kids are exposed to direct or indirect anti-Semitism.  We need to teach them (and sometimes ourselves) that we cannot be afraid of hate, nor can we ignore it. Our positive example of fighting hate with love, education and respect empowers the next generation.

That’s why we were over the moon when Gabriella Berk from New Jersey asked if she could work with our sister program, 2 for Seder, as her Bat Mitzvah project. Gabby is smart, well-spoken and believes in Tikkun Olam.  She will clearly go on to do great things. Thank you for leading the way Gabby!!

Take Action:  What does it mean to you to be a Bat Mitzvah?
Gabby:  To be a Bat Mitzvah means taking on the responsibilities of a Jewish adult. Celebrating holidays and fasting and understanding what is happening in the world outside my safe bubble. Recently my family and I watched a documentary on anti-Semitism. I learned more about acts of hatred and violence towards Jews over the last few years. I am trying to influence my friends to become ambassadors to promote the joy of Judaism. Each of us has a role in combating anti-Semitism.

TA: You did a D’var Torah, an interpretation/lesson about the portion of the Torah, that you had to read.  What was it about?

Gabby:  My Torah portion is Vayeteze. Our forefather Jacob ran away from his family after stealing his father’s first-born blessing. While Jacob is sleeping G-d communicates with him through a dream and promises protection.

When I read this Torah portion, I thought about two major concepts. The first is the origin of the conflict between Jacob and Esau. In modern thinking, it is thought of as the start of conflict between the descendants of Jacob who are Jews and those of Esau who are Edomites, which eventually becomes the Roman Empire and then Christianity. 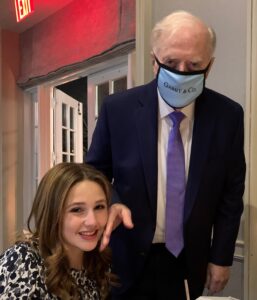 Gabby was inspired by her grandfather Eugene Ginter, a child survivor of Auschwitz- Birkenau camp in the Holocaust. They are here together at Gabby’s Zoom bat mitzvah.

My second major question is if the descendants of Jacob are promised protection from G-d then why has G-d not fulfilled this promise? Throughout Jewish history there have been hateful acts towards Jews, especially the Holocaust. I really do question why someone would want to kill six million Jews. This is particularly close to me. My grandfather, Eugene Ginter, is a child survivor of Auschwitz- Birkenau.

I spoke to my rabbi and asked why G-d would allow so much hate. Jewish thinkers say that g-d did not create the Holocaust, He created the people. People have free will to do what they want. Taking those two ideas together, the origin of the conflict and protection of our people, I am trying to understand  – has G-d has fulfilled the promise?

TA:  Why did you want to support 2 for Seder as your Bat Mitzvah Project?

Gabby:  I wanted to support 2 for Seder, where Jews invite 2 friends or acquaintances to their first Seder, because I want to help influence my friends to become ambassadors for the Jewish religion and our culture.

When I heard that Joyce Fienberg (a distant relative through marriage) and 10 others were murdered in their synagogue, I was so upset.  It left a big impact on me. I could not believe that someone would do that in 2018, in America, to someone I knew. I started to feel unsafe and to question where could I go? Participating in 2 for Seder is something that my friends and I can do. I care about helping prevent anti-Semitism.

TA: Can you describe the Project?

Gabby:  I talked to my synagogue and introduced the idea of 2 for Seder. I wrote articles for the weekly newsletter. I had planned to speak at the Women’s Seder in March about 2 for Seder.

Due to the pandemic I was unable to do the in-person activities like invite non-Jewish people to my Seder. Instead, I invited them to my Zoom bat mitzvah. When it is safe, I will continue to invite others unfamiliar with Jewish customs to my Passover Seder, Sukkah or Shabbat dinner.

I will continue to introduce the idea of 2 for Seder to my synagogue and hopefully, other families will join us. One of my family’s friends who hosts a Seder at her house already committed to 2 for Seder after learning about the organization from my D’var Torah speech at my bat mitzvah.

The Next Generation Can Push Back Against Anti-Semitism

Shielding innocent children from the raw pain of hate and anti-Semitism is our instinct and indicates that we are sensitive and good people.  We need to find a balance, a way to engage them in a manner that is positive and empowering, while also serious and impactful.

To integrate this effort with the b’nai mitzvah rite of passage is especially poignant. It reflects the b’nai mitzvah already has a strength of character that may just be the beginning. It helps us rise on Jacob’s dream ladder toward a better world, bringing us closer to our creator.

Talk to the kids in your life about how you positively deal with hate and help them become not only more resilient, but loving and thoughtful towards all.

Do you know an upcoming B’nai Mitzvah or teen looking for community service?  We are looking for volunteers!