A Teen’s Adventures with 2 for Seder 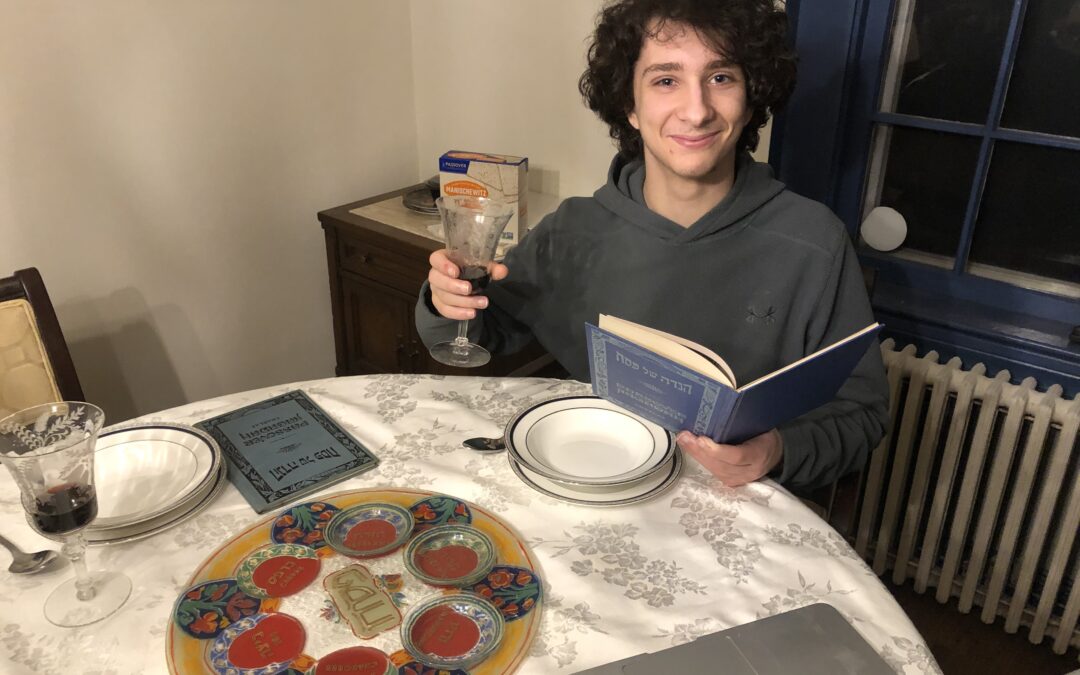 I am 15 and was born in Pittsburgh. My family lived in Squirrel Hill where the anti-Semitic attack happened at the Tree of Life synagogue. As a high school Sophomore in Maryland, who has lived in Missouri and experienced anti-Semitism firsthand, I think it is important to reduce ignorance that leads to hate. This past year, I decided to continue an important concept created by a non-profit organization named 2 for Seder, that focuses on reducing anti-Semitism by increasing knowledge and involvement.  In 2019, our Passover Seders could be done in person, and inviting two people to join in was relatively easy.  The two non-Jewish people who attended were able to learn more about what they considered, “Ancient History.”

2 for Seder – COVID Style!
Then came 2020, with a major pandemic limiting who and how many could come hear the tale of our people being slaves in Egypt and how we became free.  The pandemic may have limited the in-person Seder attendance, but I saw no reason why this amazing program had to be limited.  I decided that my family would maintain our new tradition of inviting two non-Jewish people to our Passover Seder table, initiated by 2 for Seder, even if it had to be only virtually in 2020.  Well, … if our classes could all be done successfully online, why couldn’t this?

Who are we kidding?  My parents were not thrilled with my idea at first because they thought it would be difficult and time-consuming.  However, when I explained how important this was to me, and that I was going to organize and run our online Seder, I was given the green light.  If we hope that a reduction of ignorance will lead to a reduction of violence against us simply because of our religious beliefs, we HAVE to push through the difficulties and inconveniences– like those caused by a world-wide pandemic. 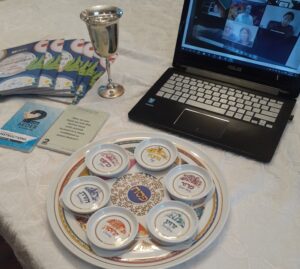 Virtual 2 for Seder can be effective. I’m in MD and my friends from St. Louis joined us.

Our online, participatory Seder was largely successful and we had good feedback. The two things I learned, and that we will do differently in the future are:

Computers and wine do not mix!  The Seder table is a very busy one, with lots of changing dishes and wine glasses being raised and lowered.  Although I wanted everyone to have a seat at the table, our online guests should have been placed further away and not ON the table at a seat.  Thankfully, the spilled wine was mopped up before it shorted out the computer!

Show it on the screen!  Feedback we received from our non-Jewish participants was that they thought it was cool, but wished they could understand what was being said in Hebrew.  I learned that Hebrew without the translation is not perceived the same way online, as it is in person.  My family reads a lot of the Haggadah in Hebrew.  If you are following along and don’t understand the Hebrew, you just look at the English.  You still feel involved and appreciate the uniqueness of the evening.  Online, it is harder to stay in the moment when you don’t understand the spoken language.  It simply doesn’t feel the same.  When I do this again I will make sure that the English is displayed on the screen AS the Hebrew is being read.  This way, the ancient language can be heard, while the meaning is read.

2 for Seder 2021
I plan to help my younger brother run this coming year’s Seder with his non-Jewish friends. Regardless of whether there is a Pittsburgh connection, these attacks cannot keep happening, and my generation must do some of the heavy lifting in educating others about who we are and about our traditions.