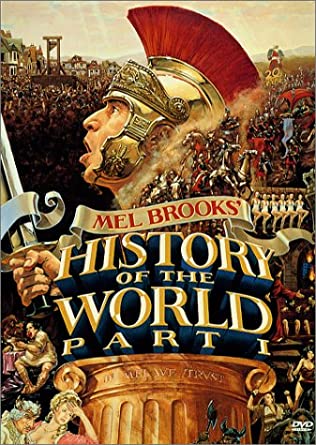 We were going to review Driving miss Daisy, as you requested.  Really!  But the news last week was just too much to resist.

Yes, Rep. Greene was on a long rant where she surmised that the Rothchild family (code for Rich Jews) started the forest fires in California due to lasers from space that are now supplying the power. If you think too hard about it, you may become upset that 1) anti-Semitism is evolving in North America and 2) a national Representative with real power to impact lives and policy is the one spewing these lies.

Sometimes you have to laugh.  Being able to use humor to defuse some cases of hate (not a Space Laser) may be our Ultimate Weapon.

How do you wield the Ultimate Weapon of humor? Our movie today shows how it cuts many ways – to see humor in the sacred, to make history interesting and memorable and to be in bad taste and make you uncomfortable.  There is a master at this kind of humor – Mel Brooks. So, if you like to use humor to make a serious situation a little lighter, dust off your space laser and let’s take a look at Mel’s craziest movie, the History of the World Part 1.

This movie has a single message – look at the horrors of history showing how ridiculous it was and since it’s in the distant past, allow yourself to laugh. To say this movie is over-the-top just doesn’t do it justice. Mel Brooks and company take an irreverent look at anti-Semitism, gluttony, and hate and try to put it in its place. Brooks played five roles—in addition to writing, producing, and directing. It’s a lot of Mel.

Starting in pre-history, the movie reviews the giving of the 15 10 Commandments to Moses, the Roman Empire during the time of Jesus, how the Spanish Inquisition became a Hollywood musical number, wrapping up with a narrow escape from the French Revolution.  A preview of the future shows us Jews in Space, complete with lasers.

Where You Can Watch [Paid and unpaid places to watch]

Reviews
58% Critics Review/ 81% Audience Revie on Rotten Tomatoes – in other words, the critics were mixed, but this movie found its audience.
2 stars from Roger Ebert back in 1981.  Ebert felt this was a bunch of skits presented as a movie, but would have been more appropriate as a TV show

Awards
You have got to be kidding. Mel Brooks won many awards, but this movie was just too much. The Jewish Space Lasers are the award.

How Does Humor Help Fight Anti-Semitism?  A Little Discussion

Take Action: Why does Mel Brooks think it’s funny to laugh at the pinnacle of Judaism?
Michael Sultan: I love Mel Brooks and his style. He’ll try anything to make you laugh. In order to laugh at Moses dropping one of three sets of commandments, you have to know something of the actual story – otherwise the exclamation (15 Commandments!) is meaningless. If a comedy movie provokes you to read the actual story, that movie has accomplished something quite profound.

TA:  Laughing when you want to cry is powerful.  Mel himself was a soldier in WWII and experienced a lot of anti-Semitism in his life.  Why isn’t this movie as funny as something like the Producers?  Sometimes the jokes don’t work.

The scene you remember the most in History of the World is the Inquisition musical number. Who would ever do a dance number to commemorate such an atrocity?  But it’s catchy, makes fun of the crazy people who did horrific things who destroyed a millennia-old society.  Many Americans didn’t know anything about this era, but with that catchy, crazy tune in your head you can’t forget the song or the history.

At the same time, this scene makes me really uncomfortable. Putting the victims in the joke goes too far, it isn’t funny.  In the Producers, “Springtime for Hitler”  focuses on an individual who was over the top, but no victims.  Both movies cause the audience to remember the historical events, but bringing the victims into it is uncomfortable and disrespectful.  All the same, Its shocking on purpose to get the learning started.

TA: You’re Jewish. Have you ever discussed this movie with someone of a different faith?  What did they think of it?  How would you recommend others approach this over-the-top movie?
Michael Sultan: My friends love this film, whatever faith they may be. It isn’t a matter of which faith the person observes, it is how serious they are about that faith. I know from first-hand experience that confident, faithful Christians love it when Mel Brooks appears as the waiter at the Last Supper. What is really being lampooned? Christ? Or Leonardo da Vinci deciding to paint everyone siting on one side of the table?  Good humor makes you think –  if that comic depiction provokes you to read the actual story it’s a success.

TA: How can you laugh in the face of hate?
Michael Sultan:  Hatred seems to always be attached to some form of Hubris, which is a large and frequent target for humor. Hence, a German dictator doing a figure skating routine works well, as does a Broadway musical featuring Spain’s Torquemada. The mystery, for me, is why this format hasn’t been repeated endlessly — a chorus line of Ayatollahs, for example. Perhaps a short film showing the explosion of North Korea’s leader, not by an incoming missile, but by his having eaten one more chocolate chip cookie than was prudent.

Use humor to get to the truth without making someone defensive.  Declaring something anti-Semitic sounds too “puritan” to me. If you get someone laughing, you’re winning!  Representative Greene’s comment was so far out there that humor is completely natural and was great to see. 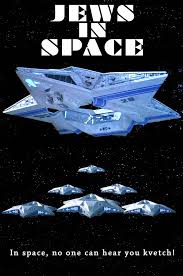 TA: OK.  Let’s get serious. Talk to us about Jewish Space Lasers.
Michael Sultan:  First of all, if there was a Jewish Space Laser, the first misuse of it would be when the inventor used it to reheat his mother’s leftover brisket – assuming the laser was accurate enough. The last thing you want is for the space laser to accidentally melt the gazebo behind the retirement village clubhouse. Just imagine the agitation that would cause at the next community meeting!

I’m still concerned about other themes/stereotypes floating around out there, looking forward to a continued dialogue. The laser, ironically, is easy to shoot down.

1. Humor may be the Ultimate Weapon, but it can go too far and cut too deep. There are examples of each in History of the World Part 1.  Regardless if you have a Jewish space laser or not, is humor in the face of hate the ultimate weapon?

2. Using humor to fight anti-Semitism and hate are classics, not just in movies but every form of art. What favorites come to mind?  Why do they work?

3. Mel Brooks feels that history is easier to make fun of rather than the present. Do you agree?

4. When you watch this movie with someone who is of another faith (virtual watch party!) do they like it?  Are they uncomfortable?  Are you?

5. Although there are space lasers in this movie, Representative Greene probably has never seen it. Would you recommend that she should?